Get your copy of Alters today at:

Can eight become one?

A patient at the Rosewood Hospital for Mental Wellness, Lola struggles to cope with Dissociative Identity Disorder—or as she calls the many egos, alters.

Their names are Maria, Tim, Clare, Zoe, Frog, Rabbit, and Samantha—all ranging in age, gender, and with wildly different personalities. But with five women and two men battling to live their lives through Lola, it’s only a matter of time before someone wins…

Therapy sessions threaten the survival of the group…

With the help of Lola’s therapist, she’s able to better understand the many personalities living in her head. They are like life-long friends, and their presence is all Lola has ever known.  Without them, she’d be in this big world all by herself, and that is even more paralyzing than the alternative her doctor has suggested—merge all seven personalities into one, dominant Lola.

With release from the hospital coming up fast, Lola’s alters scramble to prevent being erased. But after fifty-one years of hosting their lives while struggling for her own—when will it be her turn to live? Lola has to consider life outside of the institution. Friends, a job, and maybe even romance—how will she function with so many people making choices for her?

As her first act of independence, Lola must decide. Will she live the rest of her life as herself, or as Lola, party of eight? Find out in Erin Lee’s Alters, book one of the “Lola, Party of Eight” series.

ALSO FROM ERIN LEE AND THE LOLA, PARTY OF EIGHT SERIES! 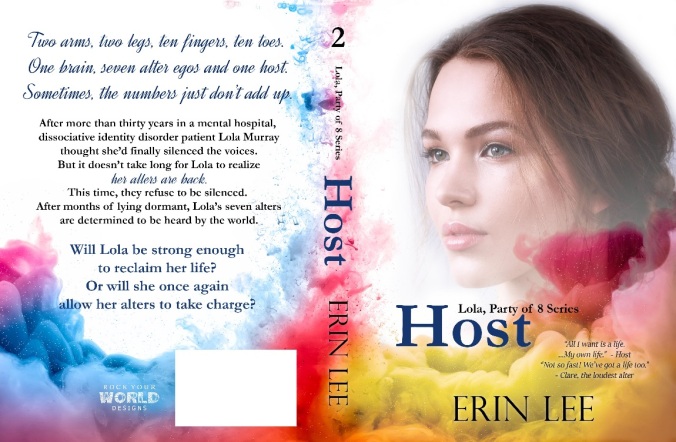 Two arms, two legs, ten fingers, ten toes.  One brain, seven alter egos and one host. Sometimes, the numbers just don’t add up. After more than thirty years in a mental hospital, dissociative identity disorder patient Lola Murray thought she’d finally silenced the voices.  But it doesn’t take long for Lola to realize her alters are back. This time, they refuse to be silenced. After months of lying dormant, Lola’s seven alters are determined to be heard by the world.

Will Lola be strong enough to reclaim her life?

Or, will she once again allow her alters to take charge?

CONNECT WITH AUTHOR ERIN LEE, LOLA, OR THE ALTERS AT:

So I did a thing yesterday and talked to Aaron Lewis!!!!
Started reading again after a slump and was looking for some new books. Our school library is doing Blind Date Withba Book this month and they picked these two for me! Both look awesome! Which one should I read first?
Our high school is playing in the state playoffs tonight! I put out a little spread, simple, but wanted to celebrate these kid's accomplishments and the coaches as well.
All set up! Come on by!
***Reviewers Needed!***
It's #nationalmuttday! Here's mine. Chancey Pants!