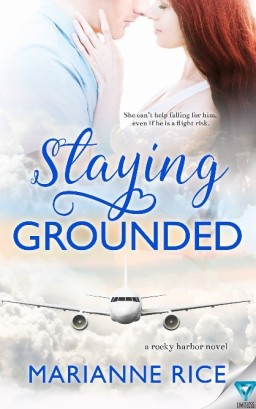 Graham loves his job—it allows him to escape his troubled past and the stigma of being a murderer’s son. But after an altercation with a drunk passenger is posted on social media, he’s forced to go on administrative leave until his name can be cleared. To get his wings back, he must attend anger management classes, and to avoid the media frenzy near his home base in Texas, he heads to Rocky Harbor, Maine.

Maggie grew up with parents who were never around, physically or emotionally. Needing steadiness in her life and in a relationship, she only dates men with normal jobs. But when Graham walks into her office and flashes his charming steel-blue eyes at her, she’s at a loss for words. Torn between her ethics and her heart, Maggie asks Graham to see a different therapist so they can explore the chemistry between them.

He has everything she’s been looking for—except stability…

Maggie touches something deep within Graham and he panics, pushing her away, too scared to face his feelings. But when a private investigator threatens to discredit not only Graham, but Maggie’s practice as well, he is faced with two choices. Fight…or take flight.

Battling a lawsuit and his heart, Graham must decide what’s more important—the life he thought he wanted…or Maggie. Maggie might be the only thing that will ever help Graham
Stay Grounded.

Graham Riley loves to fly and he loves his job as a pilot. One night, a drunken passenger gets rude with a co-worker, and Graham defends her. In doing so, he ends up on social media, and in trouble at work. He is required to take anger management classes, and decides to do so in his quiet hometown. He plans on taking his classes, doing what he needs to do and getting back in the pilot’s seat. What he doesn’t count on is lusting after his therapist.

Rice never disappoints with her novels, and this is no different. Her characters are well-developed and real. The kind of people you’d meet at the local coffee shop. As much as I love her characters, though, I also fell in love with the setting. Her descriptions of the area made me want to hop a plane and visit. (And run into my own hunky pilot!) A sweet, spicy, must read!