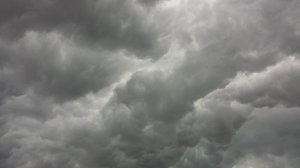 Hurricanes are a way of life down here in the South. Every summer and fall, at some point we’re glued to the television wondering where the a storm will hit. Sometimes, that track is heading right in our direction. Like today. Hurricane Laura is due to make landfall somewhere on the Texas/Louisiana coast. We’re a hardy breed though, us Cajuns, and this isn’t our first dance with Mother Nature.

Hurricanes are fascinating to me. I remember when I would tell people from Oklahoma that I was moving to Louisiana, and they would say, “But they have hurricanes!” To which I would reply, “And we have tornadoes!” Twenty years after moving here, and having been through several storms, I still say that I’d rather deal with hurricanes than tornadoes.

It was only natural that a storm would make it into my writing at some point, and one  is brewing in Once and for All. Here’s one of my favorite scenes, and one I thought about this morning as I made my own trip to Albertson’s…

Carly followed the directions Gemma had given her and soon was pulling into the crowded parking lot of Albertsons. It was so full, she had to take a spot close to the busy street, Johnston, she had just turned off of. A little walk wouldn’t hurt. She needed to work off some nervous energy, anyway.

She grabbed a stray cart on the way, not knowing if they would have any when she got in there, and surveyed her list again. It was pretty simple, the basic hurricane supplies, plus stuff for gumbo. It was an unwritten rule that when a storm came, gumbo was made. It may be chicken and sausage, shrimp and okra, or seafood in general, but when a storm was brewing, you made a gumbo. It was a good thing Emily knew how to make one, because Carly had no idea where to even begin.

She was glad she had grabbed the cart when she walked into the store because there were none up front and the store was full of people. As she turned the first corner, it was chock-a-block, like a grocery store rush hour. Everyone wanted the same things at the same time.

I need a drink. She sighed and longed for the laidback attitude of Bon Chance. She had a feeling that today there would be no “how ya doin?” or “how is your mom and dem?”

She pushed through the aisles picking up gumbo ingredients, bell peppers, celery, onions, and roux. Then the paper goods and water. She almost bumped a cart or two on the bottled water aisle that was almost empty. It was as if the zombie apocalypse had begun.

Her phone dinged as she waited for a grocery store employee to pull out another pallet of bottled water. I hope they’re paying him overtime. People began pulling off shrink wrapped bundles before he stopped.

She grabbed her phone to see that Joey had messaged her.

She grinned as she waited for his response.

Joey: Emily trusted you with that?

She resisted the urge to laugh out loud in the aisle. Seeing that there was some water left, she grabbed a package and put it in the cart. She sighed. Was this storm really going to be that bad?

Rain poured down as Carly pushed the cart full of groceries out to the parking lot. The walk was long, and her hair was soaked. The puddles on the ground seeped through her shoes. The wind whipped again, chilling her wet body.

She wiped her face dry only to have more water drip down from her hair. “I wish I was anywhere but here.”

Be safe out there everyone, and happy reading!